‘Every vote counts’ Pupils are given an opportunity to have their say in our school’s general election. All votes to be counted and announced on Friday 13th December.

‘Once you learn to read, you will be forever free’ ‘Shaping the future of Literacy across the curriculum’ We have now appointed our Year 9 literacy leaders after reviewing applications and shortlisting for interviews. Well done to all the girls that participated and congratulations to the following appointed literacy leaders Fatima Mamoon, Maariah khan, Amina […]

‘Inspiring our young learners to become the Engineers and Scientists of tomorrow’ We have given the opportunity to our year 9 computer science class to put their creativity, problem solving and STEM skills to the test which will take place over a number of lessons – they could win individual student prizes and up to […]

Year 10s deliver an assembly on the importance of good mental health and emotional wellbeing. The Qur’aan can be used as a guide for those suffering from emotional distress. ‘There is no disease that Allah has created, except that He also has created its treatment’ (Bukhari)

A big thank you to Mrs Patel and her form 10H for baking some tasty pasties and scrumptious brownies to raise funds for this half terms charity St Catherine’s. As always, they were delicious!! Season’s greeting hampers – Heartfelt thankyou message Barbara Hodgson from St Catherine’s Hospice message – “I can’t put into words just […] 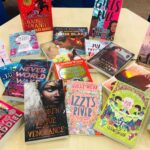 Book fair comes to an end!